Number of people. All Without People 1 person 2 people 3 people 4 people or more. Other Options. Cut Out. Do not include these words. Safe Search.

Page of Sort by. Number of people All Without People 1 person 2 people 3 people 4 people or more. You can choose up to 3 colors.

For a long time I assumed that rope was the only possible material to use for tying people up until one day I read a story where the heroine had her hands tied behind her back with her own striped woollen winter scarf.

We didn't have rope in the house, but I need look no further than the chest of drawers in the bedroom I shared with my sister to find a scarf.

I decided to experiment. I think I had three scarves to work with. I selected one at random and sat down on the floor to begin my experiment.

It must have been winter time as I remember that I was wearing the long woollen stockings with their uncomfortable and awkward suspender belt that we wore before wool tights became commonplace for girls a couple of years later.

They were probably black; I think all my stockings were at that time. I'm not sure what else I was wearing, but it would probably have been something like a pleated knee-length skirt with an elasticated waist and a heavy hand-knit sweater worn over a soft short-sleeved blouse rather like a modern polo shirt.

I wrapped one of the scarves around my ankles several times and fastened it by tying a simple overhand knot, the only knot that I could make at that time.

I knew that real knots were more complicated but had no idea how to go about tying one. As bindings go, it was, of course, dismally ineffective: a couple of kicks and it came undone instantly.

Nevertheless, I persevered and re-tied my ankles. I used the second scarf to tie my knees in the same way. It made the ankle binding fractionally more secure, but only to the extent that it took perhaps three kicks instead of two to get free.

I re-tied my ankles once more and then my knees again. I put my hands behind my back and tried to work out how to tie my wrists together with the third scarf.

I couldn't find any way of wrapping it around my wrists while still holding it, let alone knotting it. I decided to try tying my wrists in front instead, as my second-best choice.

I could see what I was doing that way, but it was equally unsuccessful. Finally, I settled for wrapping the scarf around my arms and body, just above my elbows, and tying the ends together in the middle of my chest.

It would only stay in place if I kept my arms tightly pressed to my sides and didn't move. Somewhat exasperated, I untied myself and put the scarves away again.

However, I wasn't about to give up on the experiment and decided to enlist some help from Karen, my sister. She was only fifteen months older than me, but still my big sister and someone I could turn to for help.

As chance would have it, when I found her, Karen was reading the very comic that had triggered my experiment in the first place.

I told her what I was trying to do and she immediately agreed to help. By pooling our own winter wear and exploring the depths of our shared dressing-up box, we amassed about six scarves.

I think the rest were more reasonable sizes. I sat down on the bedroom floor once again and Karen did her best to immobilise me. She tied my ankles and then my knees in the same way that I had tied my own.

Her knots were exactly the same as mine and just as ineffective. However, as I wasn't struggling, they both stayed in place. I put my hands behind my back and Karen did her best to tie my wrists together.

The first attempt was not at all successful: four feet or so of woolly scarf wrapped around two slender wrists resulted in an unwieldy bundle that didn't feel remotely secure.

The second try, using the small pink scarf was a bit better but no more expertly knotted. Karen finished off by winding the really long scarf from the dressing-up box around my arms and chest about four times and then knotting the ends.

The overall result felt snug but not terribly secure. Our younger brother Timothy appeared at the bedroom door at this point.

He is three years younger than me, so he must have been three or four at this time. He usually took an interest in the things that Karen and I did together, but would occasionally decide that we were doing scary big-girl stuff and decide not to investigate further.

Seeing his sisters tying each other up seemed to come into that category, so he went away again without saying anything.

Escape took a matter of seconds as all the knots yielded to the slightest tension. Undeterred, Karen tied me up again, pulling all the bonds just a little tighter the second time.

If I sat perfectly still, I had some faint inkling of what it might feel like to be tied up, but I knew that escape was trivially easy, so there wasn't the remotest sense of helplessness, let alone peril.

All-in-all, this wasn't very satisfactory. My mother came back to the doorway. Timothy was with her, solemnly surveying my predicament. Karen and I explained that I had just the opposite problem and I needed help to stay tied up.

I pointed out that our knots didn't work and asked our Mum if she could show us how to do better ones. I quickly shed my bonds and headed for the bathroom.

When I returned to the bedroom, my mother and sister were kneeling on the floor untangling the scarves that I had kicked my way out of a few minutes earlier.

I felt a little tingle of excitement in anticipation of finally finding out what it was like to be tied up.

As I entered the room, my mother briefly rummaged through the drawer where she kept my winter things and handed me a pair of mittens. Damage to skin wasn't something that had occurred to me.

I put the mittens on, pulling the cuffs well up over the sleeves of my sweater, and sat down next to where my mother and sister were kneeling.

Timothy was still standing just inside the door, watching the proceedings with interest. My mother began as I and my sister had done, by tying my ankles.

She pulled the scarf much tighter than I had done. I was surprised to see my mother form a knot exactly as I had, but then she showed us how to add another similar knot, but going the other way, to make a reef or square knot.

The result felt satisfyingly secure. The same procedure was repeated just below my knees and my mother showed us how to make sure we tied a real reef knot and not a granny knot.

I shuffled myself around, so that my back was towards my mother and put my hands together side-by-side. She gently rearranged them so that my wrists were crossed then wrapped the short pink scarf around them twice, pulling it much tighter than Karen had.

She tied the first half of the knot and then jerked the binding tight before completing the reef knot. My mother finished off by tying the long scarf from the dressing-up box around my arms and chest.

Once again, she pulled it very tight and may even have got one more turn around my body than Karen managed. She knotted it off in the middle of my chest then leaned forwards and kissed me on the top of my head.

As soon as my mother had finished, I knew that I was completely helpless and would stay tied up until someone freed me. 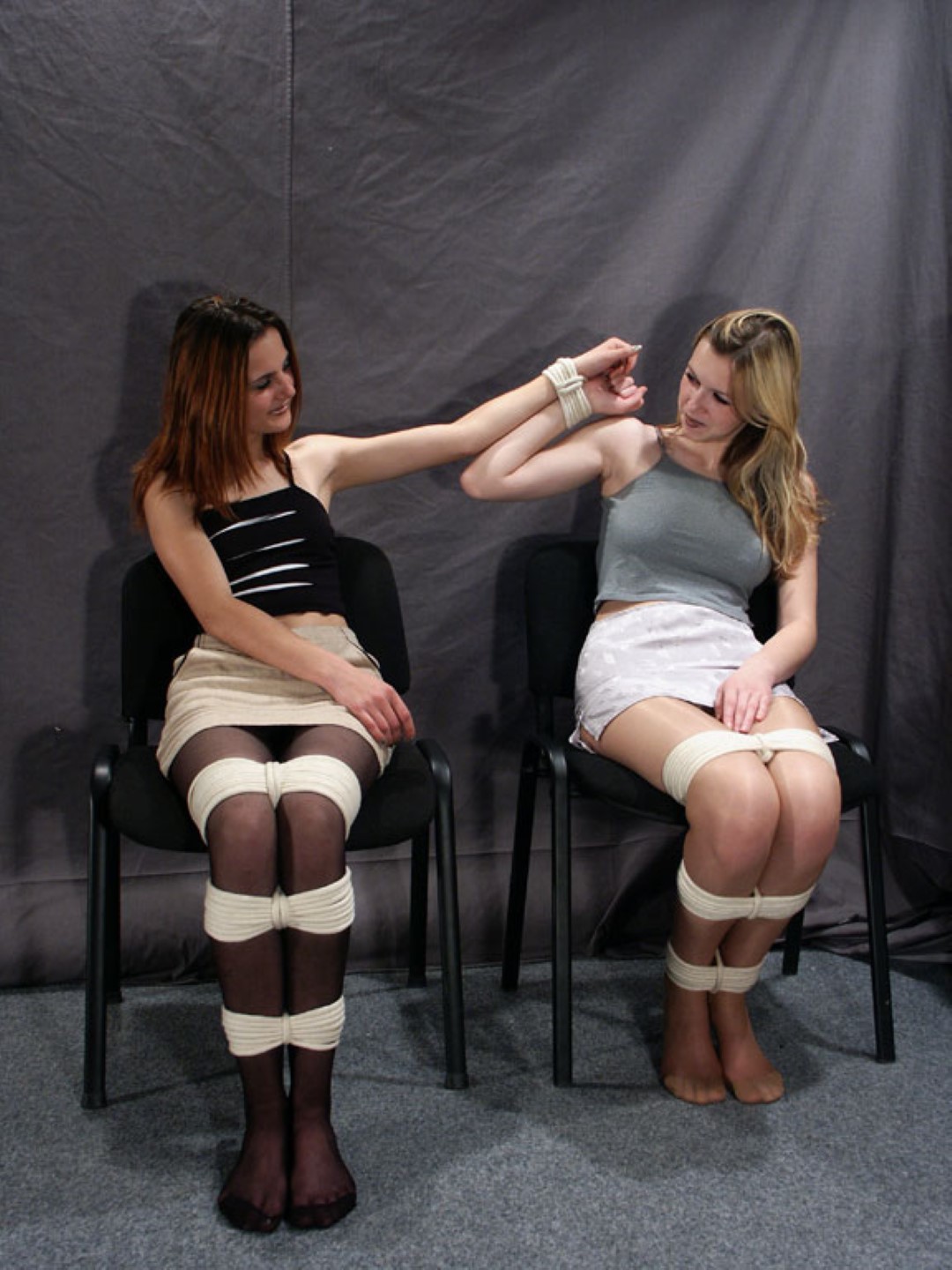